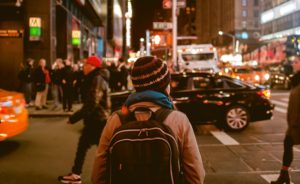 Journeys Toward Compassion: Interview with Carol Hwoschinsky, by Anne Batzer
Medford Mail Tribune, 2002
Carol Hwoschinsky says she really didn’t fear for her own safety on her last trip to Israel. But then there was that one evening. It was the darkest hour of a gravid and dead-silent January night. She was all alone. Gunshots pierced through the cold. “The Israelis were out looking for terrorists,” Carol explains, wincing at the painful memory. “they were getting pretty close. It was just so upsetting.”

​She did the only thing she could think of: She took a long, hot shower and let the soothing sound of the transparent pebbles of falling water mute the lethal racket. It was then she learned what other people who live in a war zone have come to understand – the comfort of routine and simple normalcy.

She tried to go back to sleep.

She got up in the morning.

But then she did something else: She walked into a room of Israeli and Palestinian citizens to listen to the stories of their lives. And she taught them to listen to each other.

Six times Carol has traveled to Israel, a destination some call “a holy place with too much history and not enough geography,” to practice and share the skill she believes is at the core, the very heart, of peace: Compassionate Listening.

​Israel is a long way from the hilltop home a the end of Strawberry Lane where Carol has “retired” with her husband of 47 years, Paul. Nestled in a meadow of wildflowers and surrounded by a grove of birches, a stand of aspens, and a few brightly blooming redbud trees, her comfortable abode is filled with mementos of their world travels, their yearly 2-week backpacking trips and Carol’s varied career, stemming from her dual masters degrees in Special Education and Counseling Psychology. It’s an idyllic setting, with organic gardens stretching out from the backdoor and a daily view of the changing layers of light moving across the valley. Their three active grandchildren live close by. It’s a well-deserved refuge from a life already filled with service to others.

So why not just relax and enjoy it all? “I can’t. I just can’t,” Carol laughs. “Believe me, sometimes I long for it. I’m almost 70 and I am tired of deadlines.”

​
But, continuing the conversation, it becomes apparent that Carol’s unbounded curiosity and her extraordinary empathy compel her to explore the sometimes messy depths and harsh realities of pure love. It’s her heart’s longing to heal pain that continues to draw her to some of the world’s most violent places.

Talking with Carol is revelatory. She gives voice to core truths we all know, but too often ignore. She shared some of the experiences that have informed her life and brought her to this work.

​
I’ve always thought the first experience I ever had that sensitized me, where I was imprinted, was when I was four years old and living in Florida,” she says. Her mother took her to a fair. “There was a little African-American boy high up on a platform. People would throw balls at a target and he would fall into a pool of cold water. Then he’d scramble up and start all over again. I watched these big, strong men throwing the balls as hard as they could.

​
“The little boy’s pain was palpable,” she continues. “I got hysterical. My mother had to take me home. From then on, I grew up knowing anyone else’s pain is mine.” Years later, Carol studied quantum physics: “I learned that any one thing that is going on in the world truly does affect all of us.”

​In 1954 Carol says she was “stunned into an awareness of the ravages of war then I bicycled across Germany and France.” But it wasn’t just the gaping holes left by bombed-out buildings that touched her. “I realized war is never over. The fear and the suffering continue as people account for their losses. Anger and hatred fester.”

Another experience of awakening for Carol came in the 1970s. “One of the biggest impacts on my life was teaching disabled people at a community college,” she recalls. “I saw the same thing I now witness in war zones: individuals overcoming and working through tremendous obstacles. I’m just so attracted to seeing people fully exercise their potential. It’s a humbling experience in comprehending what it means to be fully human.”

The glimmers of insight about how conflict and crisis offer opportunity started coming together and forming the light that’s guided Carol’s path. In the 1980s, she looked for material on the subject and found almost none. So she did what women do-she started talking to her friends. “There were just no books, so we looked inside ourselves for answers,” she says. For four years she and three friends experimented with conflict resolution. “All the activism of the time- the nuclear issue, the environmentalism – was so angry, we thought there must be a better way.”

​They started by processing the conflicts among themselves or with their families. “When we would get to that point in the dialogue where we could see an opening to another possibility, we would stop and analyze how we got there,” Carol says. Eventually, when they knew they had something worth sharing, the four women started Conflict Evolution Associates and taught their newfound skills to a variety of groups in the Bay Area.

Carol now works the The Compassionate Listening Project, which as sent about 500 people into the Middle East to listen to the stories of both Israelis and Palestinians – and to teach them the skills to listen to each other’s stories, because, as she says, “it’s the only thing I know to do that doesn’t create an adverse reaction.” And nations are no different from individuals in that “we must heal our own pain. Otherwise, we project pain and suffering onto others,” she believes.

​Carol rejects the notion that listening with compassion is a passive process. “You have to be centered within yourself, so you notice your own judgments and your desire to argue,” she explains. “You learn how to ask questions that don’t create defensiveness. It’s incredibly hard work, but it works. This stuff works! I’ve seen Israelis and Palestinians use this process to look beyond the stereotype to see the human being. They become curious about each other and come to the realization that ‘if I’d had this person’s life experience, I would be acting the same way they are.’”

​It’s the first step toward reconciliation. “And when you are strong enough to forgive, you are no longer a victim, no matter what has happened,” Carol points out.

​​She’s heard the criticism before: How can this help, when the leaders – Ariel Sharon and Yasser Arafat – won’t even talk to each other? “Compassionate Listening empowers the constituency,” Carol responds. “It creates a healthy environment, where people are active in figuring out their own futures. My philosophy is that you do what’s right in front of you. If I know what I’m doing is right for me, I trust it’s having the impact I want.”

4 thoughts on “Journeys Toward Compassion: Interview with Carol Hwoschinsky, by Anne Batzer”